Your Body and Gravity 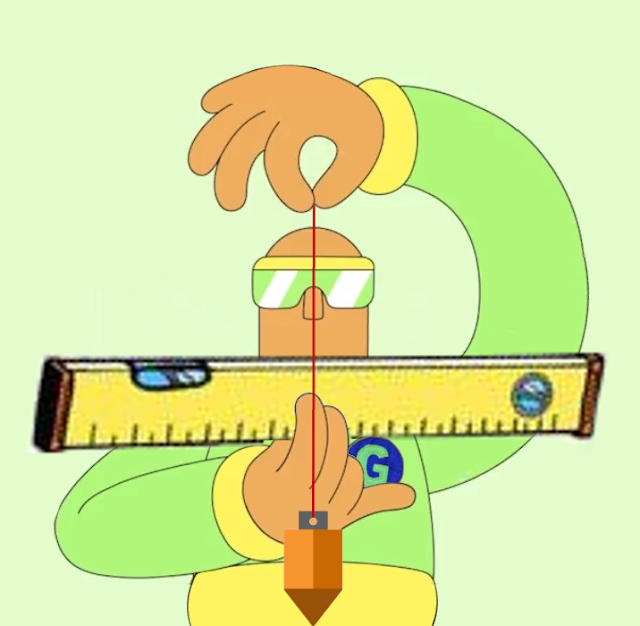 On Earth we have to deal with Gravity. Even so, Gravity is so constant and ever present we don't notice it. Just like the air we breathe. Or how the creatures of the sea relate to their own watery environment.

We also generally don't take notice of how our bodies are relating to it either. All that is taken for granted. But, the human body is just like any other structure. The same rules apply. Ignore at your own peril.

We live our lifetime in the field of Gravity. That's an obvious fact. How we are with it in the makeup of our bodies, that is something that mainly goes unrecognized. Underappreciated in terms of the implications.

It's easy to assume that standing on one's two feet is balance. Well, that's about keeping one's balance. There's another kind of balance, however. Balance in the body; the makeup of the body. Specifically, how the various segments of the body fit relative to one another; and, how they work together. How that all stacks up in respect to the dictates of Gravity.

You don't need to have balance in the body to scoot along on a skateboard, to walk a tightrope, to play golf. All that. But when you're in balance, doing those things and any other physical activity gives you more options. Full range of movement, economy of energy. 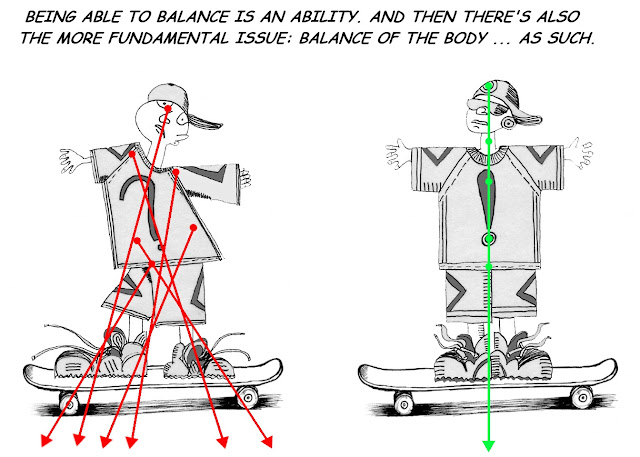 Imbalances in the makeup of the body show up as chronic pains, stress, lowered energy, limited performance. Yet, being out of sorts with the action of Gravity is not recognized as such. 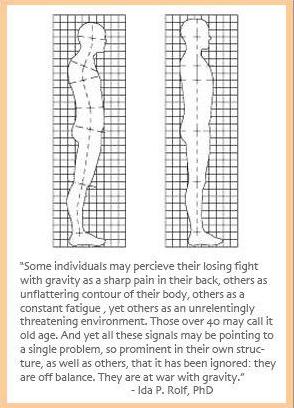 We grow up incurring imbalances in the structural makeup of our bodies. This is the result of a combination of factors: accidents and traumas, bad habits, lack of proper instruction, modelling after significant others who may not be adequate examples of healthy structure themselves.

Here's a key point. Although we automatically get bigger and stronger as we mature, structure — that is, how the major segments of the body come to fit and work in relationship to one another — is learned. In this respect we are mainly self taught, trial and error.

Over time such imbalances become imbedded into the fabric of our flesh. We then live below our potentials, putting up with imbalances which largely go unnoticed as such since they developed gradually over time. We must work just to hold things together.

The body is plastic. It is able to adapt. At any age, whatever your life circumstances, you can easily learn to not only reverse imbalances, but also to cultivate a significantly improved arrangement in the makeup of your body. When the tensional forces throughout the body are in exquisite balance, it is called equipoise. Strong, effective, easily upright. Unstressed. Alive! 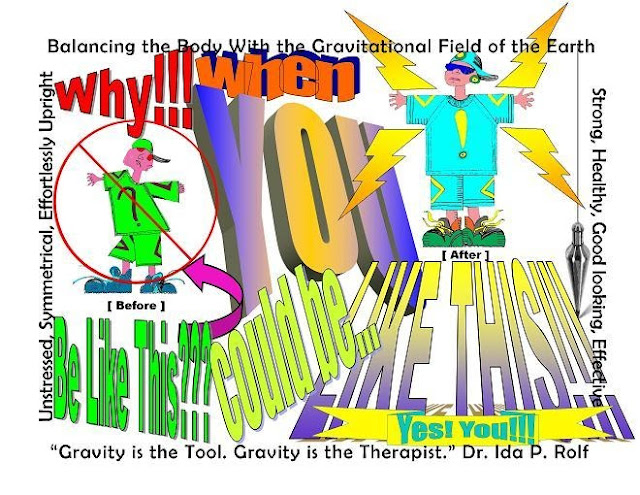 The definitive and peerless approach to balance the body with the gravitational field of the Earth is called Rolf Structural Integration. Rolf, after the originator, Dr. Ida P. Rolf.

The subject of the human body and its relationship to the pull of Gravity is at the heart of what Structural Integration is about. The major segments of the body are designed to stack up vertically, each segment level and symmetrical. Or, at least it should be. 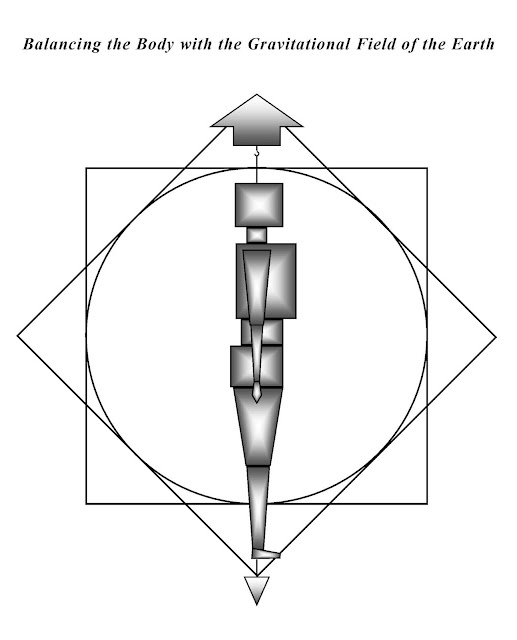 We're all made of the same parts; yet, why so much variation? There's genetics, to be sure. But, in respect to how all those same parts come to fit together and work ... this is acquired over time. Most arrive at adulthood with a random mix of balance/imbalance attesting to our own personal histories growing up.

Of course, it's not all bad news. The average individual gets along well enough. But, insofar as those unresolved imbalances are concerned, we may not be aware that we live below our potentials and spend energy just to keep things together in a losing battle with the constant pull of Gravity.

Probably our first conscious encounter with how Gravity works was as children when we played at stacking blocks. Sooner or later, by trial and error we recognize that those blocks will line up one on top of the others if they are straight and even. If we graduate to irregular shapes, like stacking stones, then a third factor comes into play. Finding the center of balance. Symmetry, or the lack of it, is another category as well. Mind you, all this is what's known as preverbal learning. You get it simply by observation and doing. Just like we know things about water simply by drinking it, or swimming in it. 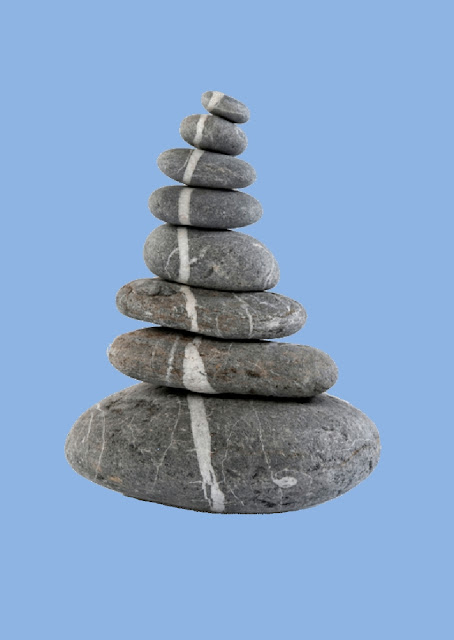 So, let's look at the human body in terms of how it stacks up according to 1) its basic Anatomical design and 2) the laws of Physics.

The normal, healthy design of the human body calls for its major segments to be stacked up vertically, all level and even. Gravity dictates the same thing — "plumb and square" as designers and builders say — at least if you want to live well at the top of your game, without pains and stress.

While it is well known what is normal to the design of our bodies, just look at what is usual. Over time the vicissitudes of life leave their impressions as random imbalances in the makeup of the body. Further complicating this situation, an imbalance in one place automatically gets compensations in others. These inefficient patterns too easily get left unresolved. "That's just the way I am" you might say. Hence, we arrive at adulthood with a random mix of imbalances fixed into the fabric of our flesh. It happens gradually. We don't notice it. 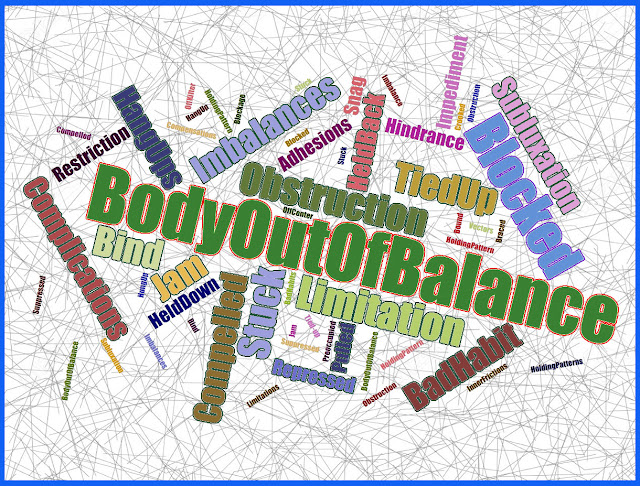 Good news! The body is indeed plastic, it can change. It adapted to the condition you find yourself in right now. You can also learn to find a balanced stance.

The structural makeup of the human body is bound by a continuous three dimensional matrix of interrelationships mitigated by the connective tissue known as Fascia. This Fascial organ is continuous from head to toe, from skin down to bone. It runs through every muscle and organ down to the cellular level. You can imagine it like the intricate pulp element in an Orange and other citrus fruits.

The Fascial system is adaptive. Over time according to how we use — and misuse — our bodies, we show up eventually with a unique pattern of imbalances firmly anchored into our very flesh.

With skilled touch and informed guided movements a Rolf Technician takes an individual from living with a random set of imbalances [think restrictions, holding patterns, hang ups] to a stance which is more in keeping with the inherent Anatomical design and the realities of Physics on that arrangement; specifically, how the whole of it needs to operate under the constant pull of Gravity. 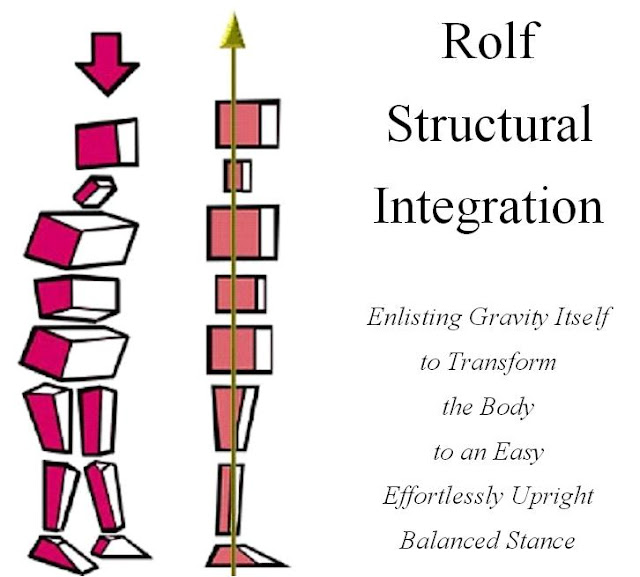 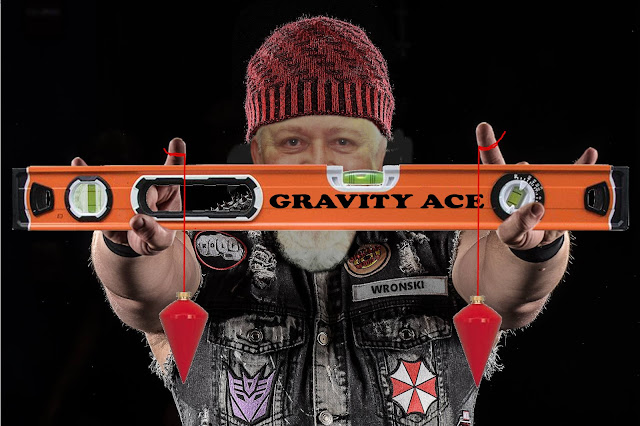 Gravity is for us a "medium" we live in; kind of like water is for fish.

The thing about Gravity is that it is ineluctable. No denying it. So ever present and constant that we are inured to it.

Yet ... just like any other physical structure on Earth, the human body — your body — is subject to the simple Physics of the downward pull of Gravity.

The healthy, correct anatomical design of the human body calls for everything to be stacked up vertically, with all the segments level and even.

When you look, you can see that there are a whole lot of folks living with accumulated, random imbalances built into the fabric of their bodies. Because this has happened over so many years we take the organization of our body as it has developed as a given.

Not so fast. Because the body is plastic, it can change. Change toward a level of balance according to the dictates of Gravity. Easily upright, unstressed, nice and even. That's strong, healthy, good looking, and effective.

Get that for yourself.
Posted by David D. Wronski at 3:12 PM